History of the Flora Public Library

The aspirations of Flora’s citizens to establish a public library were kindled in a very early day in local history. According to information attributed to a story by Mr. W. W. Bowler, the first library was established by the Kenners, the Riders, the Lowreys, and a Mr. Cope in 1870.

Another source states that seventy civic-minded citizens of Flora, each donated ten dollars to form the first library, commonly known as the City Library. Donations of books and money from social functions and other money-raising events supported the small library. The first library was housed in various locations in the business area during this time.

On Dec. 12, 1885, Mrs. Thomas Blanchard, S. Ulrich and A.E. Shinn filed a certificate of application in the office of the Secretary of the State of Illinois, Henry D. Dement. The charter was signed on Dec. 23, 1885, to establish a library under the name of “The Flora Library Association.” This association was also called the City Library Association. The five trustees were appointed to the association: Thomas Blanchard, Zachariah Green, John S. Symonds, Mrs. M. H. Presley, Mrs. John M. Cunningham. The trustees designated February 22 as Book Donation Day. For years, a book shower was held annually on this date to obtain additional books.

Minutes from a meeting of the City Library Association trustees on Wednesday, December 3, 1902, at the Friend Telephone Office, found the organization preparing for a drive to obtain a Carnegie Library. Officers were elected that would lead the organization in this endeavor. Trustees at this time were: President, Reverend A. B. Cunningham; Vice President, Mrs. J. J. Picketts; Secretary, Mrs. T. J. Friend; Treasurer, Reverend J. G. Harmon, Trustees; Miss Julia Parsons, Mrs. Robert Gray, Miss Dora Rider, Mrs. H. F. Pixley, and S. B Smith. A motion was passed to “petition the City Council to petition Andrew Carnegie to give a Library building to Flora.” A committed of Rev. Harmon, S. B. Smith, & Mrs. Gray was appointed to select a building for temporary use as a library.

At the next association meeting on Jan. 6, 1903, the trustees agreed to use H. C. Michels book store for the temporary library. The group accepted H. C. Michels proposition to furnish lights and fuel and care for the library for a salary of $100.00 per year. A committee was appointed to evaluate the condition of the books in the old library and move them to Michels book store. Members of the committee were: Rev. J. G. Harmon, Mrs. H. F. Pixley, and Rev. A. B. Cunningham. The board as a whole was appointed to select new books and become familiar with the holdings of the old library. Little is known about where the library was housed before being moved to Michels book store.

According to another source, in January 1903, The Flora Library Association, with the newly organized Federated Woman’s Club of Flora, obtained the signatures of their combined membership and 400 others in order to call a city election to transfer responsibility for a public library to the City of Flora. 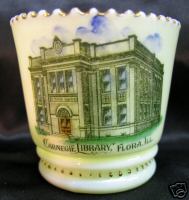 Three custard glass pieces, featuring a colorized architectural drawing of the Carnegie Library, are on display in the front lobby of the new building. It is speculated that these were either given away during the grand opening or sold to raise money for the library.

A resolution was adopted at the next meeting on April 6 as follows:

“To the Honorable Mayor and Alderman of the City of Flora, Illinois:

Your petitioner would show that the following request was formulated at a meeting of the Library Board of Trustees held on April 6th, 1903.

To the Mayor and Common Council of the City of Flora, Illinois:

In view of the fact that the contract is about to be let for the construction of the new Carnegie Library building, there are certain preparations necessary to the proper construction of such which will have to be made by the City of Flora.

Among these things are the preparation of the ground upon which such building shall stand by leveling and grading the same-in this case it will mean a fill of considerable depth and arrangements for the necessary means of ingress and egress from the street to such building. The expense of this preparation will be estimated about $300.00 and the Council is respectfully asked to make such appropriation for Library Purposes.”

The campaign gained momentum as the board authorized the President and Secretary to sign the contracts for construction and a Building Committee of five was appointed by the Mayor. Members of the Building Committee were Rev. A. B. Cunningham, H. F. Pixley, Robert Gray, J. M. Mamer, and S. B. Smith with R. Smith as an ex-officio member. The committee was authorized to “act as such and proceed to make all necessary contracts and erect said Building.” The board President was instructed to prepare a request to the City Council asking that the Library Building be placed in the center of the City Park. A $10,000 grant from the Andrew Carnegie Foundation and $900.00 from the City of Flora, would provide the funds to build the new library.

On May 12, a brief meeting resulted in President, Rev. Cunningham, and Secretary, Mrs. Friend being selected to “confer as a committee with a committee from the City Council to select a site for the Carnegie Library Building”. The Carnegie building was located in library park, described as Lots 1, 2, 3, 10, 11, 12 of Block 11 in the Original Town of Flora.

The second floor of the new library was to be an auditorium with a large stage, later referred to as Library Hall, with a seating capacity of about 500. Therefore, in September, the ladies of the board set about lining up entertainment for the opening of the library and a subsequent lecture course. Library Hall would serve as the cultural center of Flora for many years. The first season’s lecture course for the 1903-1904 Fall and Spring Season, provided through the Central Lyceum Bureau, was:

In October, the ticket price for the lecture series was set at $1.00 for the four programs. The process to procure seat for Library Hall was initiated. Later the board voted to purchase 342 opera chairs and six dozen folding chairs.

In early November, with the opening of the newly constructed library fast approaching, a library and janitor had to be selected. Mrs. Carrie Hayward was selected as the first librarian for the Flora Carnegie Library. Her salary was set at $20.00 per month for the hours of 1:30pm to 6:00pm and 7:00pm to 10:00pm. Brad Mann was contracted to be janitor for $20.00 per month in Winter and $5.00 per month in Summer. Plans were made to move the books from Michels store to the new building.

At a meeting on Nov. 21, final arrangements were made for the grand opening. The Coterie had asked for the honor of opening the library with a “house warming.” The attractive two-story, yellow-face brick structure officially opened on November 23, 1903 but few details of the opening are known. 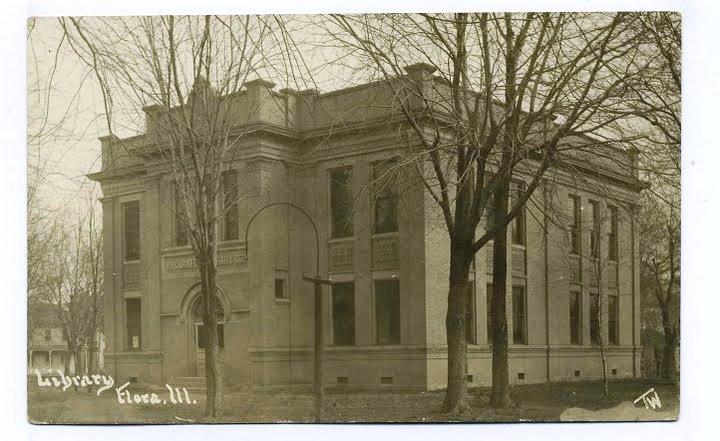 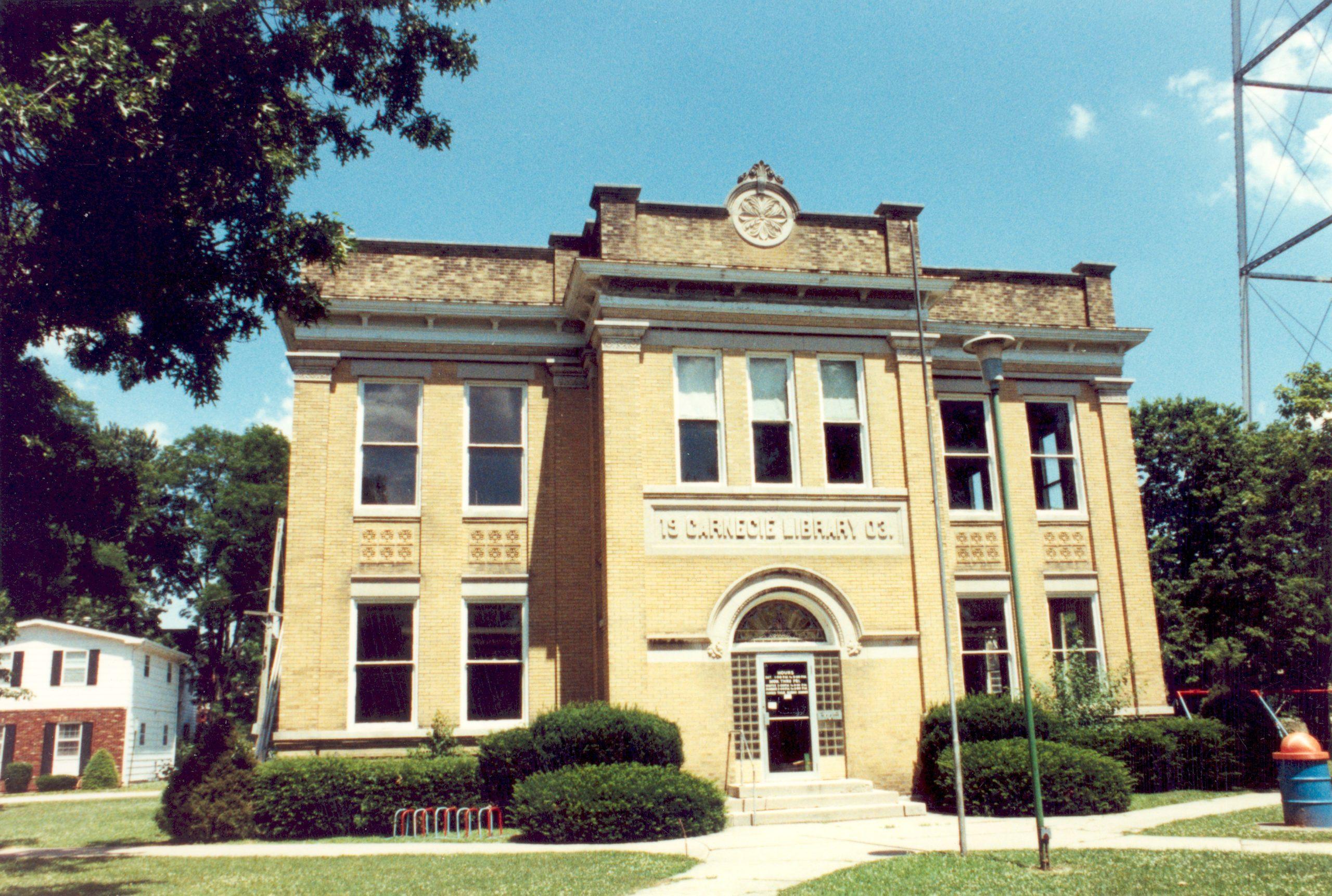 The final Treasurer’s Report for Library Building Funds was submitted at the Dec. 19, 1903 meeting. The report listed as follows:

The board’s final act in 1903 was formulating rules for library use.

Many years later on Feb. 17, 1941, the Flora Woman’s Club was given permission to remodel and refurbish the long unused second-story auditorium with the understanding that the Club would receive use of the room for 99 years. It was known as the “Flora Women’s Club Rooms” until 1975 when the upstairs was closed to the public. The lower floor was remodeled with painting and new carpeting in 1979.

The Carnegie building served its public well until January 1990, when a structural engineer deemed it unsafe for further use. After the building was condemned, the library applied for and received an LSCA Construction grant in the amount of $225,000.00.

A new 9,285 square foot building was planned and fund-raising efforts raised the necessary matching funds ($300,000.00) in 18 months. A former Flora resident and high school alumnus, Marion Thomas “Tom” Hall, donated his expertise as an architect to design the new building. The new Flora Public Library, rebuilt on the same site, was completed in the fall of 1992 and was dedicated on March 1993. 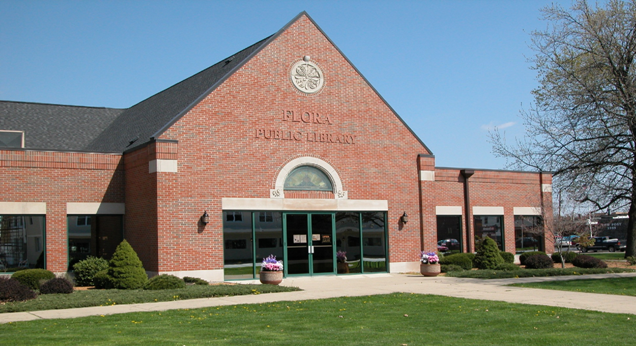